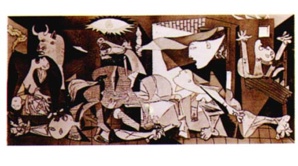 A German official approached Pablo Picasso, he was standing in front of his enormous, black and white magna opus, Guernica. It was the 1937 world’s fair, the Spanish Civil War was raging, and the German Wehrmacht was gaining strength. “Did you do this?” He said, motioning with obvious disgust at the giant mural, Picasso’s shocking portrayal of the destruction of the Basque village of Guernica by Hitler’s Luftwaffe Condor Legion. The iconic image is jagged, grotesque, man and animal alike scream into oblivious violence, a horse is broken, a spear puncturing its flank, a bare breasted mother roars into the sky, her dead baby cradled in slack arms. The German repeated himself, his voice growing louder, “Excuse me, did you do this?” He demanded. Picasso turned, smiled politely, and answered, “no sir, you did.”