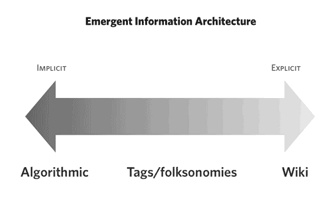 Tags seem to me as a hybrid. They’re explicit in that people have to engage in some explicit act of applying the tag. They’re implicit because the aggregate of that tagging leads to folksonomies and other social metadata that starts making connections between information that was not there before. Flickr takes this one step further (and back towards “algorithmic”) with clusters (my favorite being “pitcher“).

Wikis represent an extremely explicit mode of emergent information architecture. No connections or relationship between information exist without users making them themselves. What’s fascinating to me is how communities self-regulate in such a way that this doesn’t lead to a linked-out mess. Lostpedia demonstrates strong organizational principles, yet allows the freedom for users to pretty much do as they will.